Morocco has some of the most distinctive architecture in the world. In this blog review, we are going to look at the influences which define it, and learn how to recognize it by its most notable elements.

Architecture and History in Morocco

In the American cinematic classic Casablanca, we’re treated to a thrilling tale of love and loss set in World War II. The backdrop for this drama is the very real city of Casablanca, located in the North African Mediterranean country of Morocco. From the fans of Casablanca to the visitors who travel to Casablanca, there’s something eternally fascinating about this city. It can feel exotic, yet familiar, no matter where you’re from, and the reason for that is the unique architecture that characterizes the nation. It’s an architecture that reflects the long and complex history of Morocco, a country that’s been a crossroads of culture for centuries.

Moroccan architecture is a tapestry of influences, so we’re going to discuss it in terms of these influences, starting with the Berbers. The Berbers are an ethnic group, native to Morocco, who developed the first major architectural traditions of the region. Of these traditions, few have survived as well as the aesthetic created through the Berber use of mud brick as the dominant architectural material. Known as pisé in French, the solid, imposing look created from this material can be found across Morocco, even if the actual use of mud brick is not as common anymore. 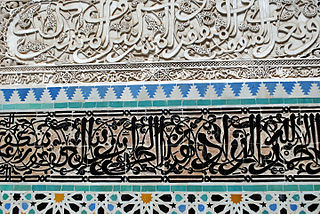 When looking for Islamic influences in Moroccan architecture, keep an eye open for intricate geometric patterns, ornate tile or woodwork, and decorative calligraphy. Islamic architecture tends to be highly decorative, but also very consciously laid out. The courtyard layout is common in both ancient palaces and everyday homes, called riads or dar, reflecting a clear division between places of public and private interaction. Entryways with Islamic, horseshoe arches welcome you into these spaces. Apart from these elements, many common Islamic buildings have long been ubiquitous features of Moroccan skylines. Mosques (religious buildings) are found in every city, identifiable by Islamic-style domes and sky-high minarets, or towers. As the Islamic powers who introduced the religion to Morocco arrived amidst an era of perpetual warfare, many Moroccan cities are surrounded by impressive walls. 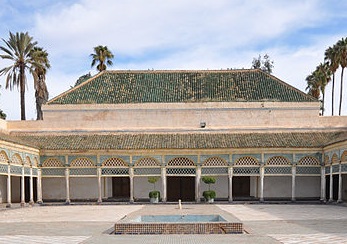 Islamic influences may be most visible, but in the 8th century the Moors (an Islamic Berber population in Morocco) crossed the Strait of Gibraltar and conquered most of Spain and Portugal. For centuries, the Moors held most of the Iberian Peninsula, which sent Islamic influences into Spain but also brought several Spanish influences back into Morocco.

The complex Hispano-Moorish elements of Moroccan architecture reflect this blending of cultures. Some very clearly Spanish influences include the white, stucco walls and red-tiled roofs that can now be found across most parts of Morocco. In addition, the exposure to Spanish architecture also introduced more European styles of arches into Morocco. The blending of European and Islamic arches can be seen in the keyhole-shaped Moorish arch. At this point, we’ve covered Berber, Islamic, and Hispano-Moorish influences, but we’re not done yet. In the early 20th century, France occupied Morocco and essentially began colonizing it. As a result, French architectural elements were tossed into the blender and can still be found throughout Morocco.

There are a few major French influences we find in Morocco. Some, like a fascination with gardens and courtyards, blended well with Islamic ideals. Others did not. Islamic architecture places very, very little emphasis on windows. After all, windows violate the division of public and private space, which Islamic architecture tries to avoid. The French, however, love their windows and to this date, the presence of larger, more ornate, or even more functional windows in parts of Morocco owe their existence to the French.